Back in July I shared the below on my Facebook page regarding the R-word.

"Growing up, I used to use the word "retarded" to describe something that was stupid. I've removed this word from my vocabulary- and ask that next time you say it please think of this little face.  it's not funny, it's hurtful. Thanks my friends" 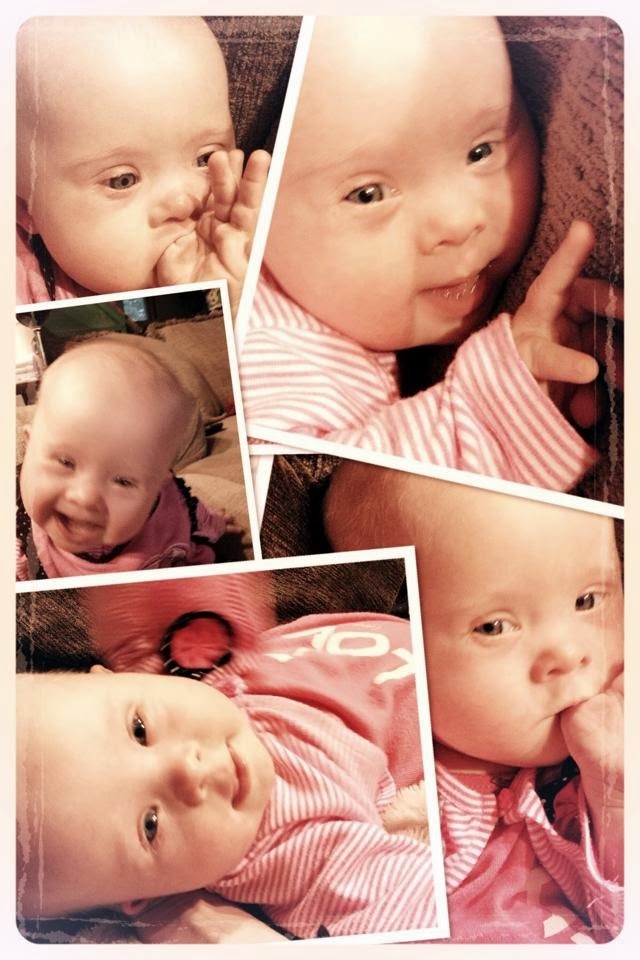 I'm still new to this "advocating" business but was feeling pretty happy with the outcome. I was overwhelmed with the amount of love and support I received from this post. I had friends reaching out to me that I have not talked to since high school saying that they still say this word, and had never thought of it being offensive. But now they were "aware" and would think of Ellie first. I had other friends and family members who knew all along that it was offensive and it had never been a part of their vocabulary. It was the first step I had taken to stick up for my daughter. I felt good and like I was making a difference- even if it was baby steps. But I'm finding that there's still a lot of work to be done.

The very next day, I was in the office of someone in leadership function in my company, and at the end of our conversation he said "it's just so retarded!" referring to something work-related that was stupid. I was frozen. I didn't say anything, just smiled and walked out of his office. I had a moment where I wanted to smack myself in the forehead and say "IDIOT" like Chris Farley. I had an opportunity to stick up for Ellie and I didn't take it. I folded like a cheap suit (as Jesse would say).

My awareness of this word being inappropriate did not come to fruition with the birth of Ellie. About 4 years ago, I was in the lunch room at work chatting with a good friend and co-worker, Kim. We were talking about switching from a PC to a MAC. I had never used a MAC before and am not confident in my skills. As we were talking I said "I can't switch computers, I'm retarded as it is!" and at that moment, as I was looking at her, I thought of her sister. My friend has a sister with Down syndrome. We continued our conversation, her facial expression or demeanor didn't change at all but I walked away with a lump in my throat and my foot in my mouth. I felt like a complete jerk. Upon getting back to my desk I was almost in tears and sent her an apology email. Of all people, I should know better because I have my brother Danny. Why the hell did I JUST NOW realize this word is offensive!? What is wrong with me?! She was very sweet in her response back, but that experience has stuck with me since that day. And when Ellie was born, one of the first people I reached out to was Kim. She even joined us for our first Buddy Walk in Ellie's honor! Thank GOD she forgave me! 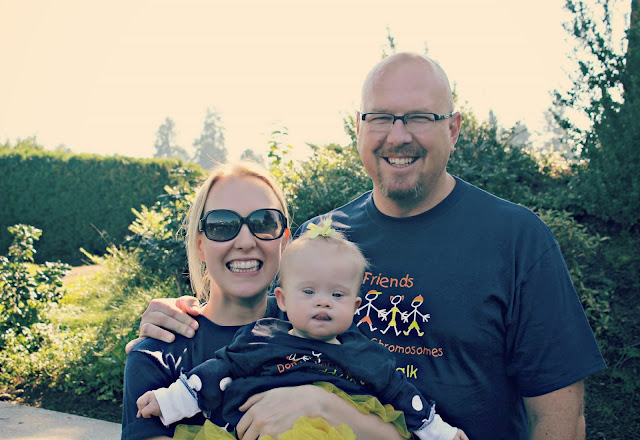 One afternoon when Ellie was around 6 months old, Will was playing video games with his buddy. This little boy said "Argh, the guy in this game is so retarded!" Immediately I heard Will say, "Hey! That's a bad word, you can't say that in our house!" I was so proud of him. I know lots of kids use that word and have no idea that it can be hurtful. He had no problem sticking up for her. Why can't I be more like him? 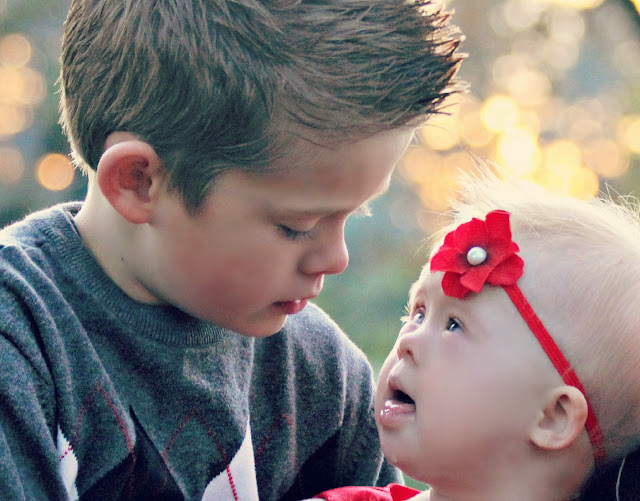 As time is ticking on, I have had some very candid conversations with family and friends about saying the R-word. Luckily I am comfortable enough to bust out our close friends when they say it, but I also am afraid of being that "overly-sensitive mom". I finally had a full blown open-hearted conversation one night over cocktails with my closest girlfriends. My friends were saying that when they say the word, they aren't talking about Ellie. They are just using it to describe something that was stupid. That it wasn't in reference to her, at all! As hard as I tried to explain that it's offensive and hurtful to me and to Ellie, they explained I need to focus on who is saying it and the intentions behind it. So with that, the conversation ended and we did not come to a truce. I was feeling like that overly sensitive new mom to a kid with special needs again. Over the past few days the conversation was sinking in and I decided to ask my brother Danny. I can't ask Ellie how she feels when people say the R-word, so I asked him. Here are his answers, from his point of view:

Me: "Danny what do you think of the word retarded?"
Danny: "I don't like it."

Me: "Have you ever been called retarded?" (I already knew the answer to this from stories I've heard about his childhood but wanted to see what he said)
Danny: "Oh yeah, all the time. People used to call me that in school."

Me: "How did it make you feel?"
Danny: "It was painful. Finally in 7th or 8th grade dad told me to stick up for myself. So one day a kid said I was retarded and punched me in the stomach, so I punched him back. I was suspended for 2 days, and it was a couple of the best days of my life! Then in high school, a kid called me retarded and I grabbed his shirt and I said "I just have a learning problem, I'm not retarded!" It got a lot better in high school. Some of the kids would stick up for me."
Side note.. my dad was a cop in Brooklyn, and a tough guy, I'm not condoning violence by any means! :)

Me: "What do you think of people saying something is "retarded" if they are talking about something being "dumb" or "stupid"?"
Danny: "It hurts my feelings and people make fun of me because I have a mental illness. I don't like the word, however it's used. It's painful to hear." 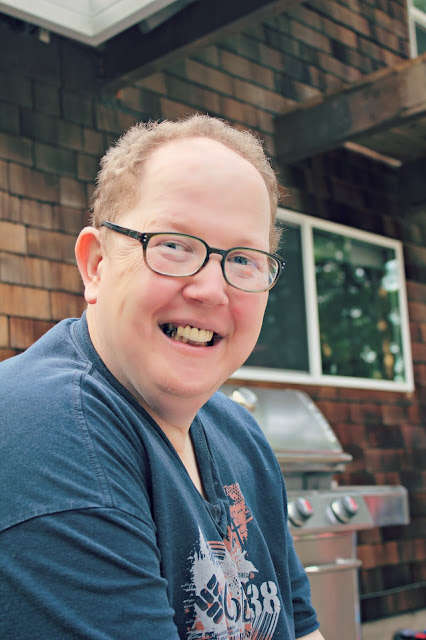 What I've learned from "the horses mouth" AKA my brother... is that yes, the word retarded is offensive to those with intellectual disabilities. I honestly feel a physical reaction in my gut when I hear this word now, just like I do when I hear the N-word or someone saying something is "Gay". I've had people say to me "geeze, pretty soon we won't be able to say ANYTHING without someone being offended!" Well I disagree, I think there are plenty of other words that can be used in place of "retarded". Like for instance, I like to use the following:

And I have a confession. This word has slipped out of my mouth a couple of times since Ellie was born.... I know, I felt horrible after I said it. And Jesse has said it too. But we are both trying, and that's all I'm asking our friends and family to do. Honestly, I'm writing this post because I'm driven by my fear of Ellie being called "retarded" someday. It was one of the first things Jesse and I talked about after she was born. We feel so protective over her and the thought of someone saying that to her literally feels like a knife in my heart. So please, please just think about it before you say it. That's all I'm asking. Thank you my friends. 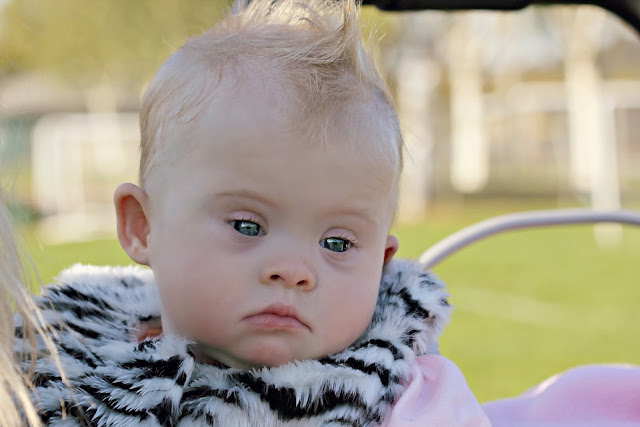 My song for this post sums it all up pretty well. As usual, I was thinking about this topic and heard this on the radio. Love when that happens.