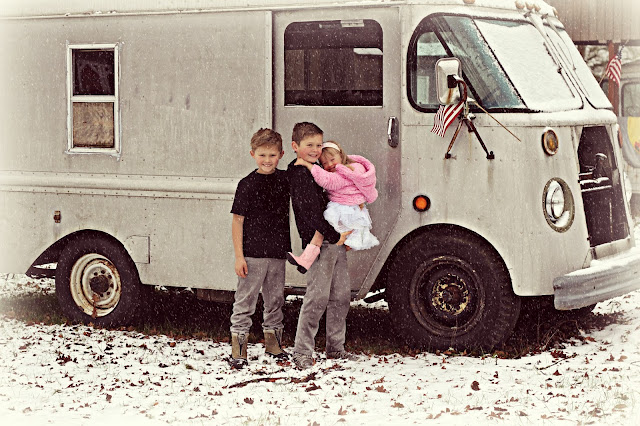 As I sit here on this snowy Thursday night, drinking some cheap red wine, I had the realization that I have only posted on this little ole' blog four times this year. That is a huge difference from the first year we had Ellie, I had posted 22 times in 2013. 22! That's almost 2 posts per month. And I remember when I started blogging, my whole intention of sharing our life was to maybe help one family receiving a Down syndrome diagnosis, to show them that it would be OK. I also remember thinking back then.. "there sure are a lot of blogs about babies and young kids with DS, and not many about older kids"... My imagination lead me to wonder if this was because it got harder as our kids grew, maybe it was harder to talk about? Too overwhelming to share? Is this why the blog posts fade into nothingness?

Truth? For us it hasn't gotten harder. It's gotten really "normal" to be honest. I don't have anything exciting to report on my little blog. We are a family of 5 and we are so dang busy that we've resorted to eating Taco Bell 4-5 times a week. I probably shouldn't admit that, huh? Yikes. I'm juggling work, Jesse's new adventure, Will's tournament basketball team (basketball 5 x a week! seriously), Ellie's appointments as well as trying to encourage our little artsy "cream in our cookie" Lukey Lukester.

So in regards to Jesse's new adventure. I have to tell you a story. If you know me at all, then you know I'm very "woo woo". Jesse has had a dream of owning his own liquor store since he was a kid. I'm not kidding. While we all were playing "house", "cars" or "teacher", Jesse was playing "Liquor Store". He had a cash register and mini bottles that were his Grammy and Papa's. He would sell the mini bottles to his make-believe customers. Who does that!?

He tried for over ten years to be appointed to a store. He was told no over and over again, but he never gave up. Finally this past September he opened his own store. He has been working 80+ hours a week and business is growing every day. He is truly good at what he does and watching him with his customers makes me so proud.

Leading up to this we had many little angel winks, including Luke asking the Magic 8-Ball if daddy would get a store and it said "All Signs Point to Yes", my mom found a little black cocktail recipe book that was her dad's on the day Jesse found out he got the store. The first recipe in the book? "Angel's Kiss". Thanks Grandpa Lehne for the blessing! After feeling like maybe owning a store just wasn't meant to be it finally happened.

I can't forget to mention that a psychic told me Jesse would get the store, hehehe. She nailed it. Too funny huh? Side note: she also said my dad plays songs for me and he loves that I notice. WOAH! Goosebumps! He plays songs for me all the time and you wouldn't believe the eye rolls I get when I mention that my dad in heaven is turning the radio dial.

To make it even more fateful, Jesse and I met when we were 18 and lost contact at age 19. Guess where we were when we saw each other again 5 years later? You guessed it, the Liquor Store. That was where we rekindled our love! I have a whole story about that encounter but seriously, it's where it all began!

And now an update on the kids!

Will is 9 now and is doing really awesome at school. He is drawn to all things sports and plays soccer, basketball and baseball. Right now he's on a tournament basketball team and they got first place last weekend at their tournament! He is really tall and loves to compare his height to mine. His favorite things are playing outside especially with the neighbors and being a comedian 24/7. He is so much like his uncles that it creeps me out sometimes.


Luke is 7 and has been really exploring his artistic side. I'm so so proud of him! He has his own art instagram and has been doing the CHAP art classes every month. He is so creative and amazes me with his artistic ability. He was asked to be part of an online gallery called childish. I asked him if he wanted to do it, and he said he absolutely wanted to! So stay tuned to see his "Happy Trees" art being featured! He also had his first commissioned piece and made $10, he was pretty stoked!


Ellie will be turning 4 in January. I can't even believe it, our baby! It's been a whirlwind trying to figure out what's going on with her legs. She still walks sideways and drags her smaller leg behind her. She's been to a couple of specialists and we are trying to determine if it could be Cerebral Palsy. Our last stop is the Neurologist and I'm just waiting to hear from them to make that appointment. She had thumb surgery in September which was a success also!
She and I were in a documentary and that was fun to do together. I think it turned out pretty great and I can't wait to share that after the new year. She also had another photo shoot for Fred Meyer and looks so cute! This ad not only ran in the local Freddy's ads but in the Kroger ads nationwide! My friend Kelly in Texas picked me up a bunch of copies!


Ellie also did a calendar shoot for FACT with her Uncle Danny! He will be getting a framed copy of the ADORABLE pic for Christmas, I can't wait!! When I asked him if he could be a model with her, he said "Tiff, God answers prayers in ways we don't expect. I've been praying a lot lately and then you called me to tell me this!" Oh man he makes me smile!

So really the whole point of this post was really no point at all. I just thought I'd check in and write down what has been going on! I should mention that I have been a really really really bad friend, sister, daughter and wife lately and I'm sorry for that. I am so lucky though because most of you still love me. I'm terrible about setting up dates and checking in. It will get better I promise, once we get out of "survival mode" of owning a new business. And once I can get more than 5 hours of sleep a night! I'm tired!

I also have to mention how grateful I am that my mom and mother-in-law have been so helpful and loving and supportive. Cooking meals, folding laundry, even cleaning toilets. Seriously big huge hugs and loves are going out to those ladies who keep me from completely losing my you-know-what. I love you! More than you know! 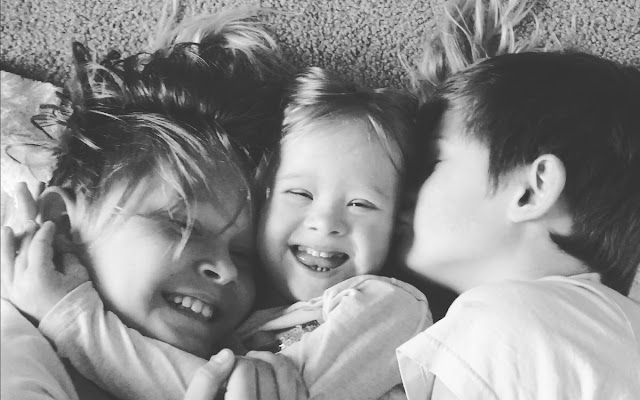 For this week's post I'm putting a very random but special song to our family. It is one that is often playing in the background when we are cooking dinner or hanging out. Every time I hear it I just think of my sweet little crew and it makes me smile. I'm getting a record player for Christmas and found this on vinyl for $2, it shipped yesterday. I can't wait to listen to it on Christmas day. Ahhh so excited!!!